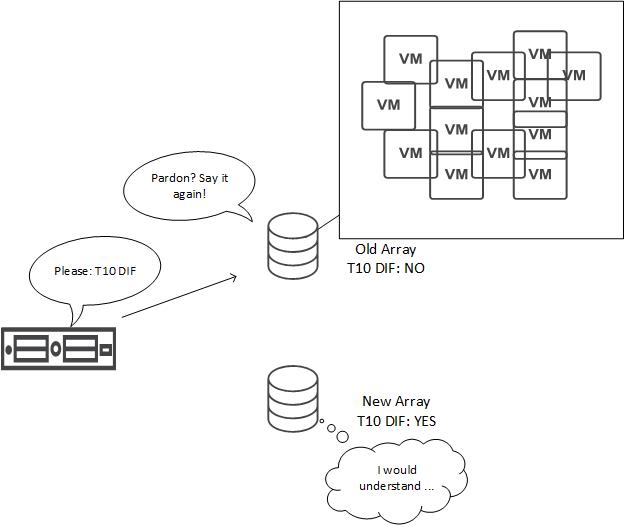 I was troubleshooting storage related problems at a customer site for some time. We run into massive ESXi storage connection problems after installing a new array. Interestingly enough problems occurred on already existing storage a few hours after new array was installed.

Because searching for root cause took some time, I thought it is worth to share.

The customer was running HPE 3PAR 7200 arrays without any problems. He ordered new HPE Primeras to migrate VMs there. We implemented the new arrays and connected them to the existing Fibre Channel (FC) switches, did the zoning and create ESXi hosts in Primera configuration.

The following symptoms were seen a few hours after zoning on FC switches were made and Primera host definitions for ESXi hosts – using VMware persona – were created. So hours after ESXi hosts saw the new arrays.

It turned out, the problem is related to a 3PAR/Primera feature named Persistent Checksum (read about this feature in HPE 3PAR Architecture technical white paper on Page 21). This feature is based on SCSI T10 DIF and available for 3PAR 8k, 20k and Primera arrays. It is enabled by default.

Root cause was not Persistent Checksum itself, it was a bug in HBA driver qlnativefc. This bug caused the HBA to send IOs with T10 DIF data to arrays that does not support T10 DIF – in my case: 3PAR 7200. Therefore IOs have to be re-sent. And this happens in a large scale.

There are a few solutions to this issue:

When you disable the FC switch port of the host HBA port that counts most errors, problem is stopping immediately. To disable port n on a Brocade switch, run: portdisable n.

T10 DIF feature can be disabled on a host. Setting is on HBA driver layer, so it is global for the host. To disable T10 DIF, run one of the following commands and reboot the host.

To check current setting, run one of these commands:

According to HPE Support and advisory, these driver versions are affected: