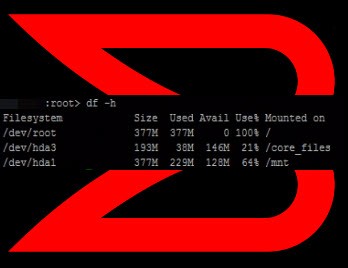 If you are working with Brocade respectively Broadcom Fibre Channel (FC) switches, you have probably had similar experiences as I have. Normally switches are running without any issues after setup. Sometimes firmware needs to be updated and zoning needs to be extended. Otherwise they just run. Last week I had the opposite experience. I saw very strange behavior caused by a full root partition on Brocade FC switch.

Fortunately a full root partition on Brocade FC switch does not cause an outage. At least not in this case. Observed Symptoms:

This situation occurred in an environment containing two fabrics. Each fabric contains 4 to 5 switches. All switches, but one 8G-switch, running Fabric OS v8.2.2c. Remarkable was the fact that the issue occurred on both fabrics on 3 switches in sum. And all of these switches are HPE BladeSystem c7000 interconnect switches.

For the following commands and troubleshooting actions, you need to login as root. User admin is not allowed to run such system close commands.

In my case this was caused by thousands of pid-files. These files are used in Linux-based systems to save process ID (pid) information for later usage. Such files are stored in the directory /var/run. Here pid-files for the process weblinkerfcgd were abundant.

First and foremost, DO NOT REBOOT THE SWITCH WITH A FULL ROOT PARTITION! This can lead to a no longer functioning switch.

To solve the problem, you need to reboot the switch. This will stop the system from trying to create new files. Sufficient is hareboot. Here are the steps that solved the problem:

At the moment of writing I do not know the exact root-cause. If I get more information from support, I will post it here.

Root partition should be kept beneath 85% filling level. What also helps to reduce used space: