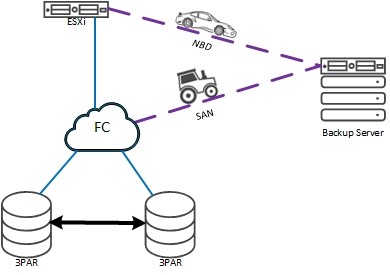 Here are some facts about the environment.

The used backup mode in this environment was NDB transport mode. This was because the physical host wasn’t equipped with a FC HBA. To improve backup performance a HBA was installed. To run direct SAN backup, a few configuration steps are necessary:

After that we saw a miserable poor SAN transport mode performance:

Fortunately the solutions is quite simple. The Microsoft MPIO feature Path Verification has to be enabled. This can be done in two ways: