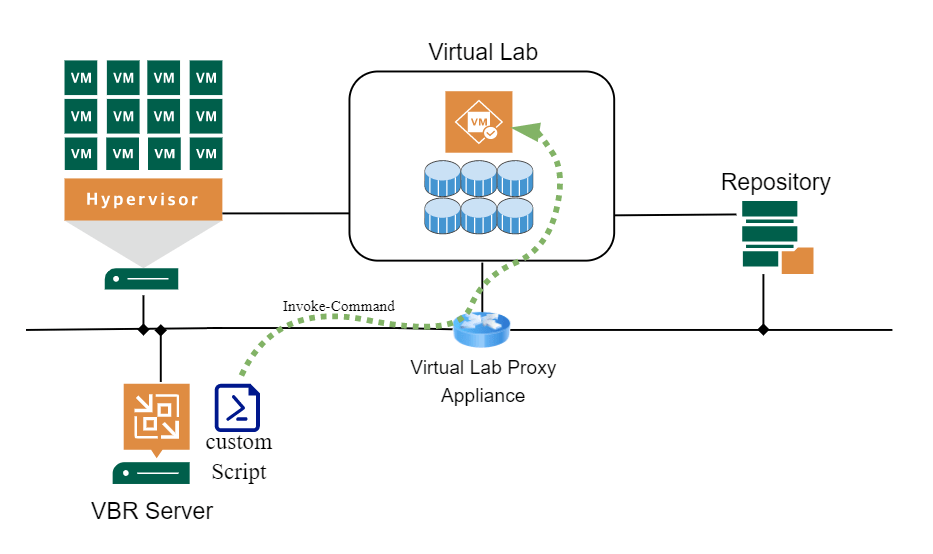 Veeam SureBackup is a powerful feature when it comes to backup verification. Out of the box, it can test well know ports and applications like Microsoft SQL Server. You can also add custom scripts built to verify own applications. This post is about using a custom PowerShell script with SureBackup. There is also a sample script included that is able to test if all defined partitions are online.

For verifying an application a test-script is needed. If you are lucky, you can find something that meets your requirements at VeeamHub. If not, write your own script.

My example script checks each defined partition. It does this by testing the existence of a single file of each partition. Of course this can done much more sophisticated, but take it as a starting point.

Return-code 1 means failure, 0 success. Therefore I start with $Return = 1. So to speak, the test must earn its success. $PartitionFile points to a text file that consists of the drive letters, this VM should have – one per line. This is because it could happen that some volumes are missing during the SureBackup run. And this is exactly what the script should test. Therefore it has to know what partitions should exist. $TestFile points to the file (relative path) that must exist on each partition to be successful. Line [5] – [9] builds the list of partition to check. If $PartitionFile does not exist, current volumes are read. As described before, this is basically not what the script should test. Line [14] – [22] contains the check of $TestFile on each partition.

Because the test script isn’t running in the VM to test, it is necessary to handle remote login to VM. The way I use here is to create a XLM file that contains the credential information with encrypted password. To create such a file the following code can be used.

But unfortunately it is not quite so simple! Only the user who encrypted the password – who executed the code – can decrypt it. VBR starts the script in the context of the user that is running VBR services. By default this is the local system account. So credential file has to be created by this user too! Microsoft Sysinternals tool PsExec can help you with that. To start a PowerShell session in the context of system account, run:

This command opens a PowerShell window that can be used to run the code above to create the credential file.

To basically enable a server to run PowerShell code on a remote server, this server must be defined as TrustedHost on the host that runs the script. In our case this is the VBR server. If you missed this step, you will see such error:

To add TrustedHosts, run a PowerShell command like this:

For IP_address use the masquerade address of the VM to test. Asterisk are also possible. So the command:

Now we need to create a script that controls the test code. The start script is located and runs on the VBR server.

Script gets parameter data $TestVmIP from VBR. It is variable %vm_ip% as we will see in next step. This is the masquerade IP of the VM to test that is reachable by the VBR server. $CredObject is filled with credential information created in Step 2. Cmdlet Invoke-Command is used to run the code within brackets of parameter -ScriptBlock remotely on -Computername which is our test VM.

5. Put it all together

Now its time to configure SureBackup to run the custom script. You can configure it for members of an application group or of a linked job. To do so, press the Edit… button for the specific VM, go to Test Script tab, press Add… and select Use the following test script. Fill in Name, browse for your script and use %vm_ip% as Arguments.

As you can see, there are a few steps to go through. Each of these steps has some sources of error. Therefore it is essential to test your solution. So test each step for itself. Here are a few tips what and how to test.

You should test the test-section of your script on itself. If this works fine, test it embedded in the Invoke-Command cmdlet.

When script is not successful – in my example a volume isn’t mounted during SureBackup run – log looks like this:

However, if the job fails, this option will be ignored.

SureBackup is even out of the box powerful. When it comes to custom scripts for application verification there are a few pitfalls. I hope this post helps to verify your backup even better by using custom PowerShell script with SureBackup.