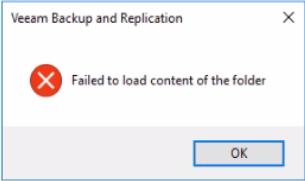 Recently I had to troubleshoot an error in Veeam Backup and Replication. Error appeared at File Level Restore operations.

Task that had to be completed

The task was to restore Windows files from a Veeam Hardened Repository.

Environment in which the problem happened

Environment consists of existing and freshly installed proxies and repositories servers. New repository servers were Windows and Linux as hardened repository (LHR). Because of this, separate Veeam mount server was needed. Mount server was a physical Windows server.

When we tried to restore files from LHR we get errors like these:

[Exception of type Veeam.BackupAgentProvider^gentClosedException‘
was thrown.]

We also could see that mounting of the restore point worked for a few moments. Restore Explorer also showed first directories. After a few seconds, mount point was disconnected automatically and browsing in Explorer resulted in an error.

After some tests we found out, this only happens when we were using newly installed proxies as mount servers. It worked fine with already running proxies and even with new Windows repository server.

That was solved the problem

When we were checking the configuration of new proxy server we noticed, system displayed the correct time, but time zone was wrong. So we set time zone and time at correct values. It still did not work then. Veeam Support helped. Support recommended that we also set the regional time settings as they were already set for the old proxies. After that file recovery worked fine with each proxy mount server.